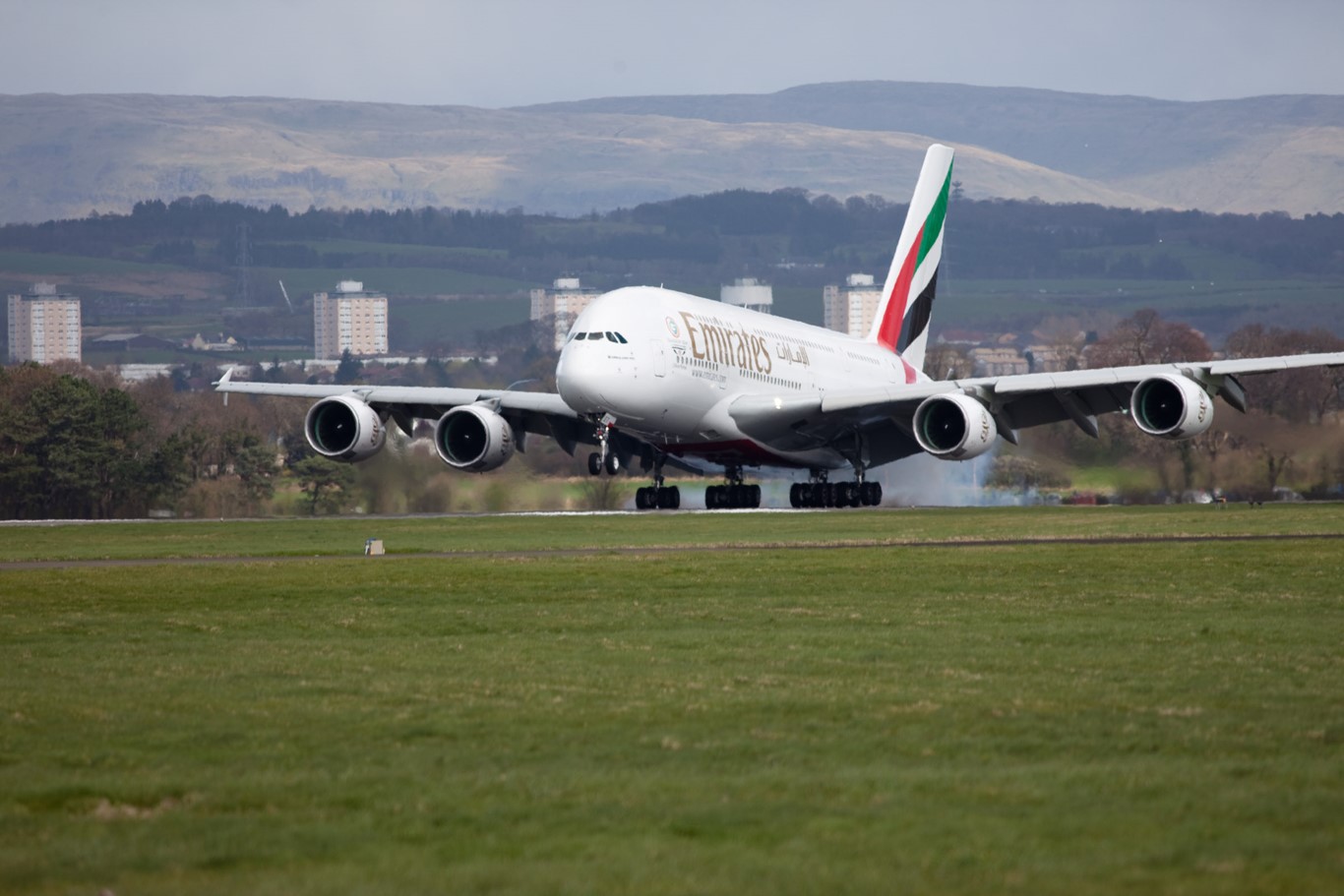 Standing over 24 metres high and with a wingspan of nearly 80 metres, the A380 is the world’s largest commercial aircraft and it will enter operation at Glasgow Airport on Tuesday 16 April 2019. It will operate throughout the summer season until the end of September 2019.

Since Emirates’ inaugural flight at Glasgow Airport on 10 April 2004, it has been one of the airport’s biggest success stories carrying more than four million passengers across its global network which now covers 155 destinations. The airline’s decision to introduce its flagship A380 confirms its status as Scotland’s leading long-haul airline.

It is the second time Glasgow Airport will welcome the A380 which first visited on 10 April 2014 to celebrate Emirates’ 10th anniversary at the city.

Mark Johnston, Managing Director of Glasgow Airport, said: “The decision by Emirates to introduce the A380 is not only a huge milestone for Glasgow Airport, it marks what is a first in Scottish aviation industry.

“We have forged a valued relationship with Emirates since its inaugural flight in April 2004 and the introduction of Scotland’s first-ever scheduled A380 service represents a major vote of confidence in the city.  We are currently investing in excess of £8M in our infrastructure to ensure Glasgow Airport is ready to welcome this iconic aircraft when it touches down next April.”

Richard Jewsbury, Divisional Vice President UK, Emirates commented: “Scotland is a key part of our success in the UK and we are pleased to be bringing the A380 to Glasgow. The Emirates A380 is one of the most iconic aircraft in the world and it continues to delight passengers. From the exclusive shower spas in First Class, to the on board lounge for First and Business Class customers to the spacious seats in Economy Class, the in-flight experience on our A380 is like no other.”

Councillor Susan Aitken, Leader of Glasgow City Council, said: “Emirates’ decision to create Scottish aviation history in Glasgow not only reinforces the airline’s confidence in Glasgow Airport, it further reaffirms its commitment to the entire Glasgow city region. Its decision to introduce an A380, the world’s largest passenger aircraft, on its Glasgow route is further evidence of its success in and is one which will massively increase Emirates’ capacity to and from our city.

“Having two flights out of Dubai – one of the world’s largest hub airports – arriving in the city everyday greatly increases Glasgow’s global connectivity, particularly through Emirates’ worldwide route network, and today’s announcement is another positive step in terms of forging greater business links and increasing visitor access from key emerging markets such as China and India.

“Our international city marketing strategy, which underpins our Tourism and Visitor Plan to 2023, is anchored in working collaboratively with Glasgow Airport, carriers and wider city and national partners, and we remain committed to developing direct and sustainable air routes that connect Glasgow to the international marketplace.”

Cabinet Secretary for Transport, Infrastructure and Connectivity Michael Matheson said: “I welcome Emirates’ decision to introduce the very first A380 service in Scotland.  This increase in capacity is a huge vote of confidence in Glasgow Airport and in Scotland as a whole.

“It further strengthens our connectivity with the United Arab Emirates, as well as with markets in Asia, Africa and Australasia which are important for Scottish business and our vital tourism sector.”

Glasgow Chamber of Commerce chief executive Stuart Patrick added: “That Emirates has made this decision demonstrates the success of the double-daily service to Dubai and shows confidence in both Glasgow Airport and the city. It also further improves an important route offering access to Dubai Airport, the biggest global international hub, and in particular grows Glasgow’s access to Asia, which has some of the fastest growing markets in the world.”