Work to build Scotland's tallest advertising tower on the side of its busiest motorway is underway.

Located next to the M8 near Glasgow, the iconic new landmark dubbed the 'M8 Tower', will be seen by over 1.6M motorists every week - and will feature one of the largest digital advertising screens in Europe.

The 40-metre high spectacular steel structure, costing a seven-figure sum, will be decorated with the world-famous 'Paisley Pattern', reflecting its location in Paisley, Renfrewshire.

Wildstone, the UK's largest outdoor advertising consultancy, will build the tower, as well as fully funding it and designing it on land owned by Glasgow Airport.

Wildstone worked closely with Renfrewshire Council to gain planning approval for the site which is one of a kind and a ground-breaking addition to the local landscape.

Work has just started and completion is expected by the end of 2018.

"The 'M8 Tower' will be 40 metres high - making it the tallest advertising tower in Scotland.

“Modern in design but keeping with tradition, the tower features the famous 'Paisley Pattern' with a solid steel finish and one of the largest LED advertising screens used to date.

"We chose the Paisley design to reflect that it sits in Paisley, an area rich in history and famous for its textiles and material design in Scotland.

"The M8, which links Scotland's largest cities, Glasgow and Edinburgh, is the busiest motorway in Scotland and reaches 3.3M road users every two weeks.

"Both directions of the motorway will showcase digital screens, providing unparalleled visibility on the M8."

The tower will also reach local traffic on the Abbotsinch Road beneath the M8 with smaller light boxes. They will feature public messages from Renfrewshire Council. 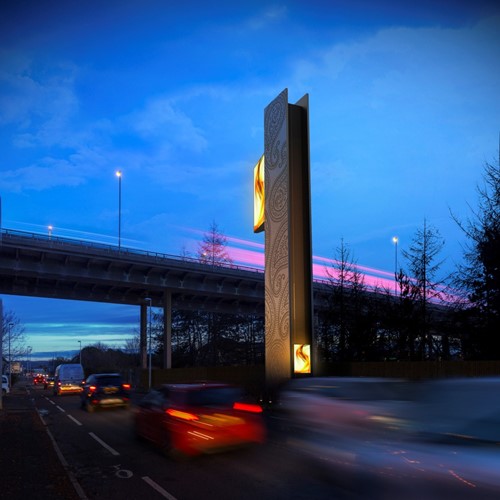 Paula Oliver from Wildstone, which is headquartered in London, added:

“We are delighted to have collaborated so successfully with Glasgow Airport to bring this spectacular site to market. Wildstone provided the funding to develop the location and acquired a long-term lease from Glasgow Airport. It is the beginning of a new era for airport advertising development and we look forward to working with other airports across the globe to provide similar results."

"We are delighted to have worked with Wildstone in the development of this ground-breaking structure. It incorporates what is a truly iconic design which recognizes the importance of Paisley to the region. This brings a wonderful sense of place to the M8 corridor which Glasgow Airport is proud to be associated with."