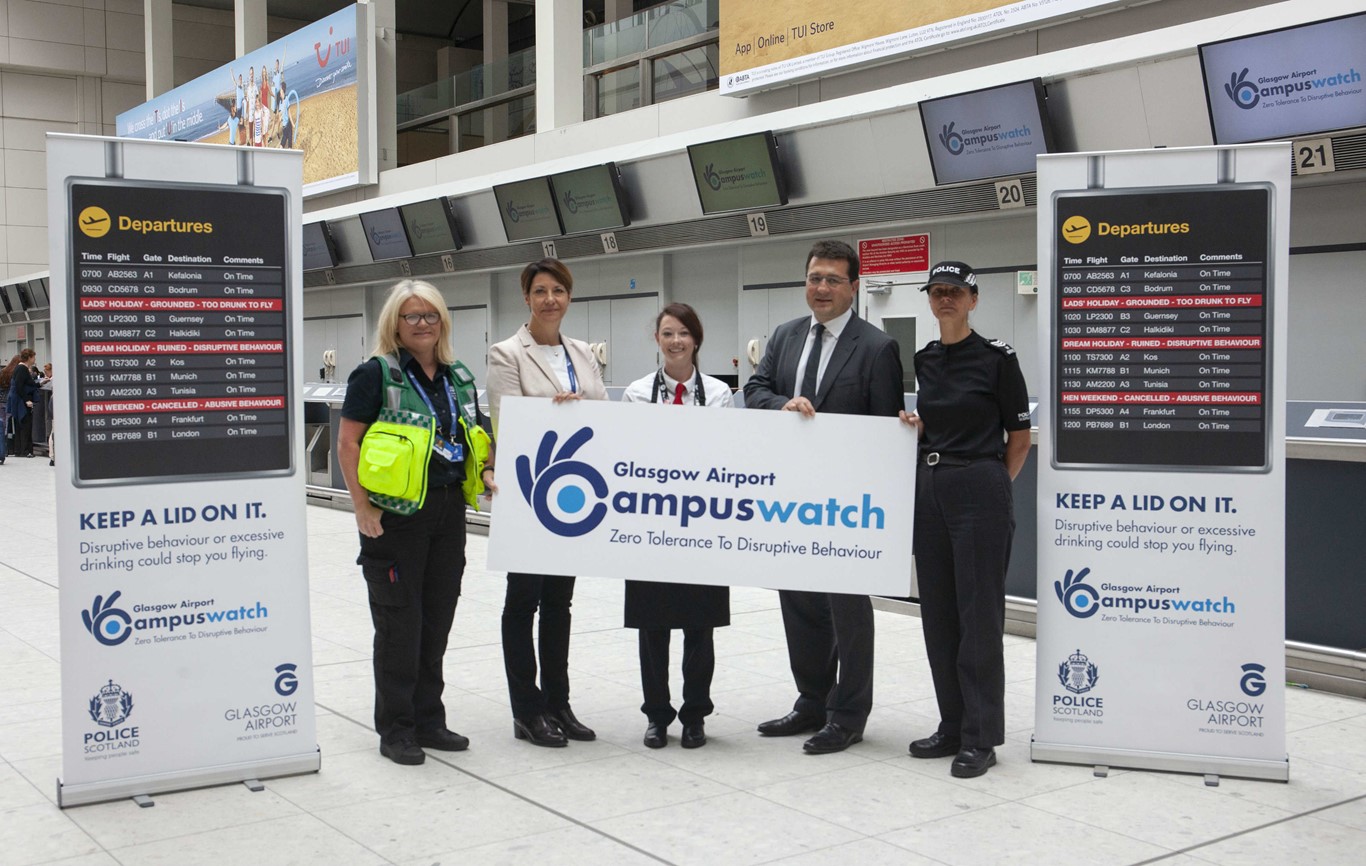 Glasgow Airport today (Wednesday, June 13) launched this year’s Campus Watch drive ahead of the 2018 summer season to remind passengers that disruptive behaviour of any kind will not be tolerated.

Campus Watch was introduced in 2013 in partnership with Police Scotland to tackle disruptive behaviour at Glasgow Airport and provides training, advice and support to staff who interact with passengers on a daily basis. This includes check-in staff, security teams, bar and restaurant employees, retailers and airline crews.

One of the key aims of Campus Watch is early intervention. Staff across the campus are encouraged to report the details of any potential incident of disruptive behaviour to the airport’s central control room through a dedicated phone number printed on each employee’s airport ID badge.

This information, including passenger description and travel details, is shared with staff across the airport campus via a rapid text alert system.

In addition to this, Glasgow Airport has also invested more than £10,000 to introduce a new digital radio system to help disseminate live Campus Watch intelligence across the terminal in addition to the text system.

Glasgow also took the unprecedented step this week to launch a national advertising campaign to remind passengers of their responsibilities when travelling through the airport this year.

Francois Bourienne, Chief Commercial Officer for Glasgow Airport’s parent group AGS Airports Ltd, said: “While it’s important to stress that the vast majority of passengers travelling through our doors do so responsibly and that incidents are extremely rare, Glasgow Airport continues to operate a zero-tolerance approach to disruptive behaviour.

“One incident will always be one too many, particularly as disruptive behaviour can disproportionately affect a large number of passengers on board an aircraft.

“Our Campus Watch system is effective because we work closely with our airline partners, retailers, caterers and Police Scotland representatives to address and often pre-empt incidents of disruptive behaviour at the airport.

“For many of our passengers, the airport experience is the start of their holiday as it should be. We want to ensure they continue to enjoy a memorable but ultimately safe and disruption-free experience.

“Campus Watch sends a clear message to what remains a small minority of people acting in a disruptive manner we take a zero-tolerance approach to unacceptable behaviour.”

Disruptive behaviour can cover a broad range of offences, but if the incident is alcohol-related the passenger involved will be refused service across all retail and catering outlets and gate staff will be notified in advance.

Other steps taken at Glasgow Airport as part of the Campus Watch initiative include:

- Campus Watch forum made up of airport partners meets regularly

Sergeant Clare Riddoch, who heads up Campus Watch at Glasgow Airport, said: "We work with our airport, retail, catering and airline partners to ensure incidents of disruptive behaviour are few and far between.

“On the rare occasion, someone is disruptive their behaviour can have a significant impact and cause concern and misery for a large number of passengers, particularly if the incident occurs on board an aircraft.

“By creating a single point of contact with Campus Watch and delivering consistent messaging and regular training, thousands of people employed across the airport work together to tackle disruptive behaviour as soon as it becomes an issue.

“Campus Watch works and we’ve welcomed a number of other airports to the terminal for an overview of the operation. Key to our continued success is ensuring that we always look at ways to improve.

“The new radio system is an example of this and ensures we communicate Campus Watch messages immediately as they happen. The public advertising campaign is a massive step and Glasgow Airport is to be commended for this approach.

“It sends a clear message reminds passengers that they are ultimately responsible for behaving in an appropriate way when travelling through the airport.

“It's completely understandable that people want to start their holiday with a bit of fun, but they should always remember to behave appropriately and drink responsibly, making sure they’re fit to fly. Being drunk or disruptive in the airport or on board an aircraft will certainly cost them more than just their flight."

Glasgow Airport, its airline partners, caterers and retailers are also signatories of the UK Aviation Industry Code of Practice on Disruptive Passengers launched last year. Like Campus Watch, the code has been designed to create a common, consistent approach to preventing and minimising disruptive behaviour.

Chief Executive of the Airport Operators Association Karen Dee said: “Glasgow Airport’s Campus Watch initiative is a great example of our industry’s commitment to tackling the problem of disruptive passengers. Thankfully incidents of disruptive behaviour are a very rare occurrence, with data from the Civil Aviation Authority showing that the number of incidents is stable despite record passenger growth.

“However, where they do happen the impact can have serious consequences. That is why initiatives such as these at Glasgow Airport are so important.

“The AOA and our airport members are part of the UK Aviation Industry Code of Practice on Disruptive Passengers, which was developed with support from airport police, bars, restaurants and retailers as well as with airlines and the UK Government supports these efforts. The Code enables a common approach across UK aviation to ensure that everyone can enjoy a great start to their holiday.

“Together we make clear that disruptive behaviour, including due to excessive alcohol consumption, is not acceptable. Passengers should be aware that consequences of such behaviour could include losing a holiday because they are denied boarding as well as fines, flight bans and prison sentences for the most serious offences.”