Delta takes flight from Glasgow to New York and beyond 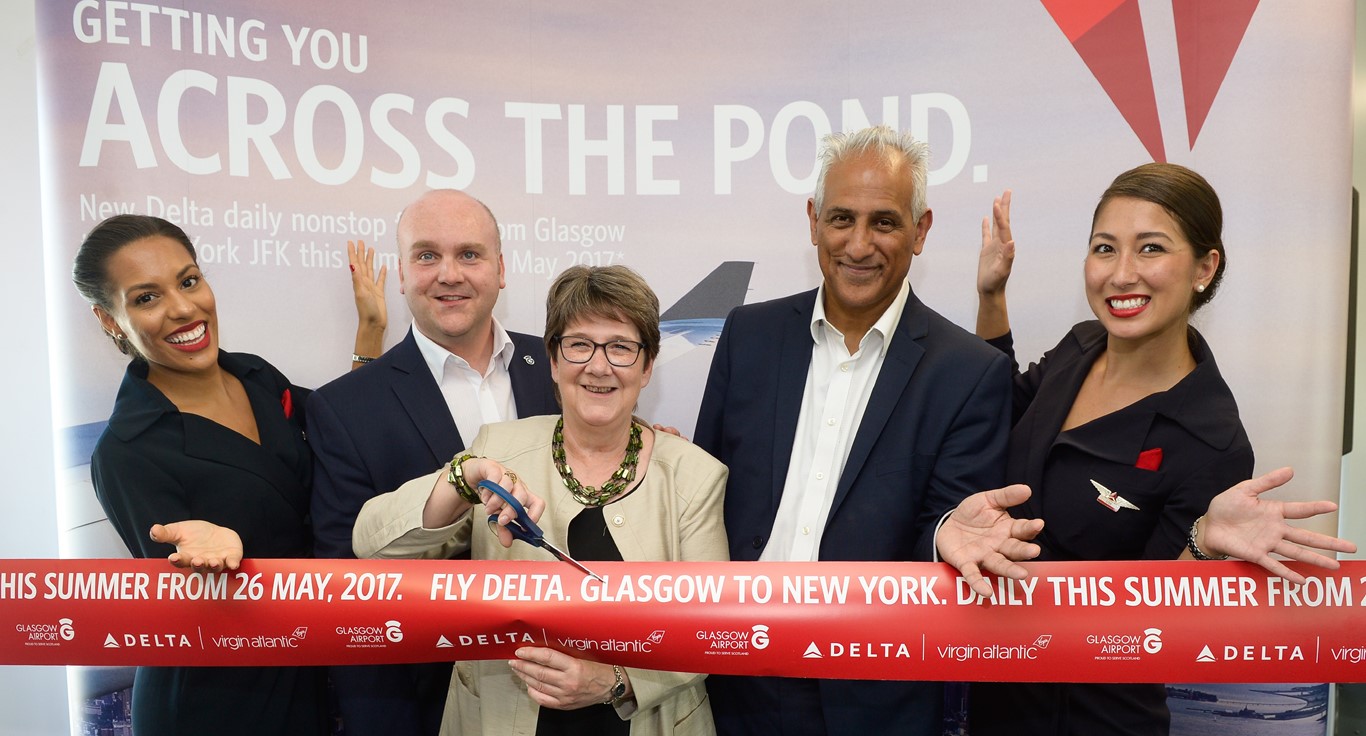 Operated daily throughout the summer, the airline’s first-ever Glasgow route will provide convenient connections to more than 60 destinations throughout the U.S. and beyond via Delta’s New York hub.

The popular route is operating up to four times a week until November, boosting capacity to the Florida resort by nearly 20% percent this year. Virgin Atlantic is also celebrating its 10th anniversary in Glasgow, having launched its first service from the airport to Orlando on 23 June, 2007.

"The new flight will also boost inbound tourism by flying as many as 37,000 visitors to and from Glasgow this summer, providing more opportunities for American tourists to discover this exciting city for themselves.”

“Glasgow is one of five new routes we are launching in Europe today,” said Dwight James, Delta’s senior vice president Transatlantic. “Delta is committed to building a network in Europe and beyond that supports our customers’ business and leisure travel needs.”

Richard Myerscough, senior vice president of Sales and Distribution at Virgin Atlantic commented: “We’ve always received a warm welcome in Glasgow and I’m delighted that we’re able to mark our 10th anniversary flying from the city with even more direct flights to Orlando. Our joint venture with Delta has allowed us to give our Scottish customers more routes to the U.S. destinations they want to fly to, creating more holiday and business opportunities than ever before.”

Alasdair Allan, Minister for International Development and Europe, said: “I’m delighted to see this new service take off, bringing benefits to business and leisure passengers on both sides of the Atlantic. The new route improves our business connectivity by giving Scottish companies better access to American markets and helps support our tourism sector by giving visitors even more options when it comes to getting a taste of the fantastic tourist experience on offer in Scotland. I wish both Glasgow Airport and Delta every success with this service.”

Dr Bridget McConnell, Chief Executive of Glasgow Life, said: “Glasgow Life has been working closely with Delta on strategic marketing activity in the U.S., promoting Glasgow as the gateway to Scotland, as well as the city’s cultural attractions. North America is Glasgow’s largest international market, with 156,000 transatlantic visits made to the city in 2016 resulting in a boost of some £76 million to the local economy, and Delta’s JFK service presents us with an outstanding opportunity to continue to grow both leisure and business tourism to Glasgow from this key territory.”

Malcolm Roughead, Chief Executive of VisitScotland, added: “Delta’s direct service between JFK and Glasgow is a fantastic endorsement of Scotland by one of the world’s biggest airlines and is a huge growth opportunity for Scottish tourism. This new service to Glasgow is well timed to exploit the increased interest in our culture and ancestral tourism among prospective visitors from across North America, where we saw an 18 per cent growth in 2016. This interest continues to grow thanks to a favourable exchange rate, initiatives such as our Spirit of Scotland campaign and Scotland’s Year of History, Heritage and Archaeology as well as the hugely popular television adaptation of Outlander.”

Steven Marshall, head of airline marketing and development at Glasgow Airport, said: “The introduction of Delta’s daily service to one of the world’s busiest hub airports is great news for Glasgow and the wider region and further underlines our position as Scotland’s principle long-haul airport. Routes such as this also enable Scotland to both maintain and increase its global competitiveness. Not only will it play a major role in supporting the country’s growing tourism industry, it will provide Scottish businesses with another direct link to what remains the world’s largest economy.”